The NFC technology not only used for more E-payment, but it can transfer data between two NFC-enabled devices.

The NFC tag can be storage inforamtion and can send information to other NFC devices without the need for a power source of their own.

NFC tags enable share information at a distance that is less than 10 centimeters. Users can share business cards, make transactions, access information from a smart poster or provide credentials for access control systems with a simple touch.

What are NFC tags ?

The NFC Tag is at the heart of any Contactless system. Small, inexpensive and portable, tags consist of a tiny chip and antenna operate at 13.56 MHz, usually embedded within a sticker, poster or other product. NFC tags store datasuch as web addresses, product IDs and business card information,transmitting it to a Contactless reader when in close proximity. The clever thing about NFC tags is that they don’t need batteries and never need to be recharged – they generate all the power they need from the Contactless transmission process itself.

The main factors likely to influence your choice of tag are memory capacity and transmission strength. The NFC chip has a unique ID and a part of rewritable memory. The antenna allows the chip to interact with an NFC reader/scanner, like an NFC smartphone.

You can write any information on the available memory of an NFC Chip. This information can be easily read (and executed) by NFC device, like a smartphone or a tablet. You just have to tap the Tag with your device.

Based on various NFC application, we designed various NFC tags, the common NFC tag is paper lable with NFC chip and antenna. Beside it, we also produced NFC card, NFC sticker, NFC metal stickers,NFC wristband, NFC ring,NFC keyfob. They can be easily integrated into multiple supports. 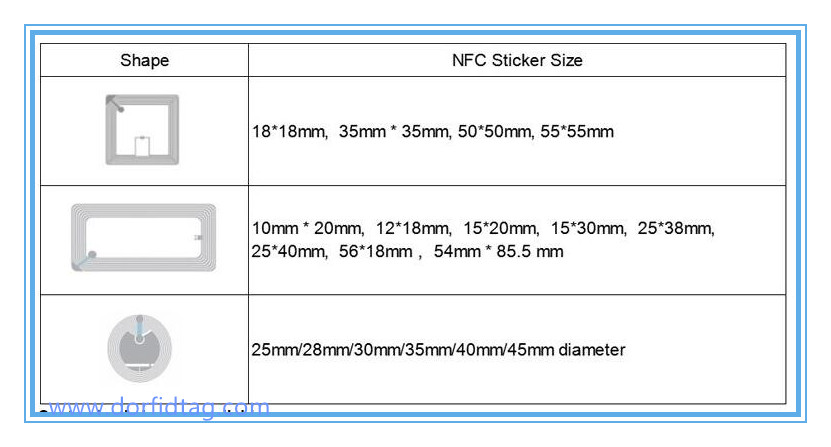 NFC Tags help you perform various kinds of information-related tasks. Each tag has specific functionality that lets you use the tag for particular tasks. NFC currently works with the following four tag types:

Type 1: The NFC Type 1 tag is the simplest of the offerings. It’s also the slowest chip, but because of the simplicity it offers, you can stuff more memory on this chip.

Reading a specific tag when more than one tag is present

Type 2: Type 2 NFC tags also have data collision protection and can be rewriteable or read-only. They start at 48 bytes of memory, half of what the type 1 tags can hold, but can expand to be as large as a type 1 tag. Communication speeds are the same for tag types 1 and 2.

Type 4:Type 4 NFC tags can use either NFC-A or NFC-B communication and have data collision protection. The tag is set as either rewritable or read-only when manufactured and this setting cannot be changed by the user, unlike the other NFC tags which can be altered at a later date. The tag holds 32 Kbytes in memory and has faster speeds than the other tags.

The Type 4 tag offers the most flexibility and memory of all the tags. It comes with a moderate to high price tag, depending on the amount of memory you get. The most important reason to get this tag is security: It offers the functionality needed to perform true authentication. In addition, this is the only tag that provides support for ISO 7816 security. It also allows for self-modification of NDEF content. Given the extra capability that this tag provides, you typically see it used for transit ticket applications.